“This Land Is Your Land”: Reflecting on the Shelburne Student Sleep Out 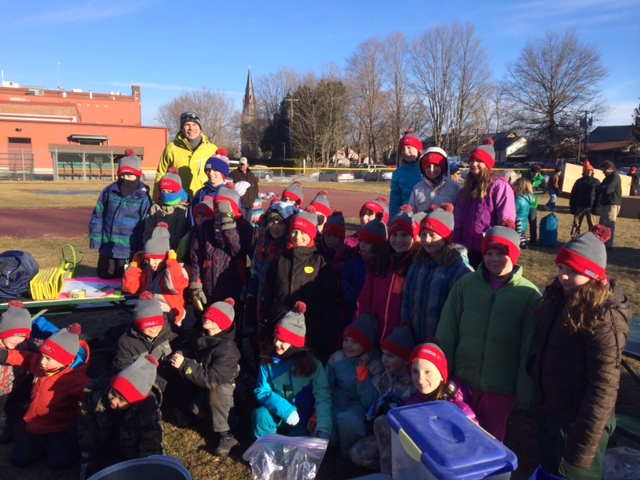 Not only that, but the program the Shelburne sleepers put together was a moving learning experience for all involved! Read on to hear, in the words of one of the organizers, what made their Student Sleep Out so special…

After Spectrum’s Executive Director, Mark Redmond, and Events Coordinator, Kate Romm, came by to thank the kids for their hard work and fundraising efforts, the kids had some time to get their sleeping arrangements set up and made posters that said things like, “help the homeless,” “donate to Spectrum,” and more.

Everyone then gathered and formed a circle. We discussed what would happen during the evening. Joplin James, a teacher at Shelburne Community School (SCS) who also slept out, introduced us to the origins of the song This Land Is Your Land by Woody Guthrie. He spoke about Woody Guthrie’s experience with homelessness. He then played the guitar while everyone sang.

Then, a young woman who Spectrum had helped told her story. That made a huge impact! There were many questions about her experience including, “What does abuse mean?” She gave a great answer to that question and many others. One participant said this morning that she felt sad for her. I think the kids learned a ton, especially about increased empathy toward the homeless and gratitude for their own home and parents.

After that, there was a candle lighting. The kids held their lit candles and walked through town with their posters hanging around their necks. That was a highlight for many of them.

We then had dinner consisting of a soup made from the ingredients that everyone had purchased ahead of time—each participant was told to spend just $3.00 at the store for an ingredient prior to the event. Many students commented that $3.00 did not go very far. In addition to the soup, there was bread, cheese, and some other odds and ends. There was about 30 minutes of free time after that.

We then gathered by the fire, and Vasanthi Meyette, a 4th grade teacher from SCS, read the book Fly Away Home with the group. This also generated many questions and good discussions. She then spoke about food selection experiences for our dinner and what this taught the kids about what it must be like to live on very little income and to have to be very selective. Two-for-one deals are valuable. The kids were also encouraged to read How to Steal a Dog that could be purchased at the Flying Pig bookstore.

Lights out was at 9:30 PM after some time for optional journaling. The night was very long with kids asking for us to escort them to the bathroom in the middle of night and stating that they were cold, which prompted us to research what they were wearing—or not wearing, as was often the case—and helping them get warmer.

Some kids woke around 5 AM or so after the temperature had dipped down to the mid-teens and were able to warm up for awhile inside Town Hall which was left unlocked for us overnight to use the bathroom and/or sleep in the gym if the cold was too overwhelming. I don’t think anyone used the gym, but it was great to know it was there if we needed it.

In the morning, we built another fire in the fire pit, and the kids were served oatmeal and hot chocolate. The Shelburne police chief came to talk and field questions about homelessness in Shelburne. We learned that on any given night there are about 20 homeless people that generally sleep out in tents in the woods where they will not be easily discovered. He mentioned that we were fortunate it was so “warm” last night given how low the temperatures have gotten through the winter. What a way to re-frame things! Again, kids were curious and asked many questions.

It was then time to pack up and parents came. Every child I spoke with mentioned that it was a hard night but wanted to do this again next year! The kids were real troopers with very little complaining and were reserved and respectful given what the event was about. The felt a real sense of accomplishment. Kelly Story and Jenney Samuelson deserve kudos for their brilliant organizational skills and the energy and passion that went into planning this incredible experience. And huge thanks to Spectrum for giving Vermont kids this wonderful opportunity to learn about homelessness and to contribute to their community in a meaningful way and for doing the work you do!

Count us in for next year!