Founded in 1970, Spectrum is a nationally recognized leader in helping youth ages 12-26* and their families turn their lives around. Each year, we serve 1,500 teenagers, young adults, and their family members.

*Please check individual programs for age ranges specific to them.

Our programs for youth are centered in Burlington and St. Albans.

In 1970, a group of community members wanted to start a shelter to house the growing number of at-risk youth who were running away from foster homes. The Burlington Ecumenical Action Ministry teamed up with this group of concerned citizens to found SHAC, which stood for Shelter Action and later became known as Spectrum Youth & Family Services.

Spectrum has continued to grow and now offers an extensive range of crucial services for youth in our community.

Basic Needs and Supportive Housing: We provide necessities like a warm place to get a meal or do laundry, along with an emergency shelter and longer term transitional housing for homeless or at-risk youth and those in or aging out of foster care.

Skills Programs: We offer coaching and mentoring for young people on basic life and survival skills, such as getting an education, finding and keeping a job, finding a place to live, or getting a driver’s license so that they can transition successfully to adulthood.

Prevention and Intervention: Through counseling, we help young people address substance abuse, mental health issues, patterns of violence, and other critical issues that stand in the way of a happy, thriving adulthood. A mentoring program helps build the self-esteem of youth.

Watch Mark Redmond, our Executive Director, describe some of the programs that we offer: 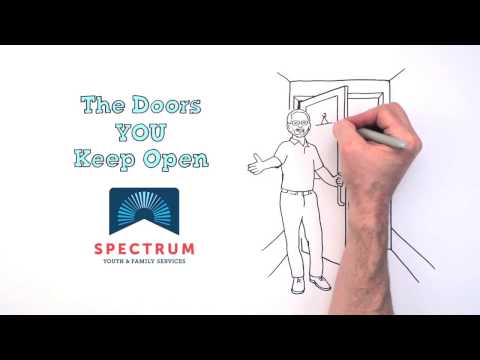